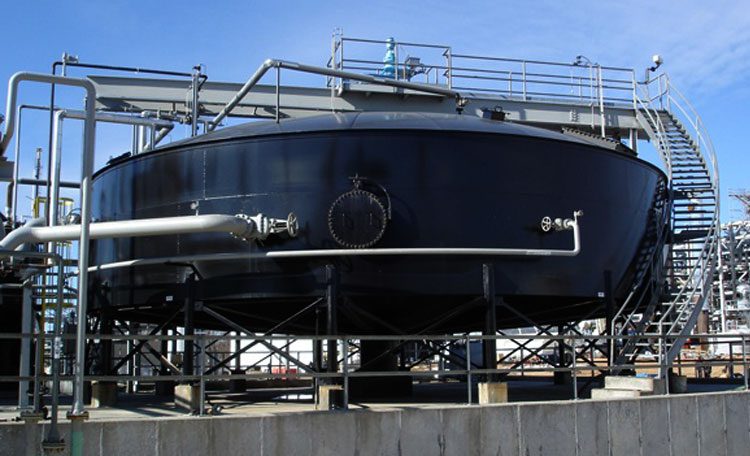 API (American Petroleum Institute) grease trap is one of the most common oil and oil removal devices that are widely used in refineries. API grease trap is designed and manufactured according to Stoke’s law and the difference between the density of solid and liquid particles and has a high efficiency in environments with a temperature of more than 5 ° C. Seven industrial group; Manufacturer of API grease trap and application equipment in the field of wastewater treatment provides a comprehensive guide for this product. Important standards in the design, manufacture and production of API grease trap, the price of API wastewater grease trap package and its applications and everything you need to know about this device will be presented below.

What is an API grease trap package?

One of the biggest problems in refineries and industrial plants is the presence of oil, oil and colloidal particles in the water, which not only harm the environment, but also disrupt the operation of the equipment and the production of products. Accordingly, the American Petroleum Institute has set standards, and water and wastewater treatment activists have designed and manufactured grease trap devices and systems for this purpose. API wastewater grease trap package is a system of separating fat particles from water, which operates based on the difference in weight of liquid and solid particles in water. In this system, colloidal particles such as oil, oil and grease in wastewater move upwards due to their weight less than water and particles heavier than water settle.

API grease trap systems have been used for the first time since 1933 in US refineries and later in other parts of the world. In all these systems, Stoke’s law is considered and therefore they have a high efficiency in removing colloidal and suspended solids in water with a size of less than 150 microns.

In designing and manufacturing the API grease trap package, Stoke’s law is considered and accordingly, the working procedure is as follows:

·         Sewage enters the API device through the inlet valves and is placed in the tank for the specified time in the device design stage.

·         Depending on the weight and size of each colloidal and solid particle in the water, the particles move up or down at different times. Due to their lighter weight than water, oil particles move upwards and solids move down to the bottom of the tank.

·         Like the DAF grease trap, oil particles accumulate on the surface of the water are periodically collected by skimmers and transported out of the machine.

·         Solid and heavy materials deposited on the floor of the machine are collected by special sludge pumps in different periods and transported out of the machine.

·         Sewage and water without oil particles that are located in the middle layer of the device will be transferred through special valves out of the package.

·         If there are oil particles smaller than 150 microns in the water, after passing the API steps, the water will enter other grease trap such as DAF to increase the water quality by removing smaller particles. It should be noted, however, that this step depends on where the grease trap is used and may not be required in some situations.

API degreaser design is based on the standards of the American Petroleum Institute and depending on the type of wastewater and suspended solids in it, it is necessary to consider various factors during the design. For example, in the design of the API wastewater degreasing package, the temperature of the wastewater entering the device is considered to be more than 5 degrees. In other words, wastewater treatment with a temperature of less than 5 degrees will not be done well in this way. Time of settling of solid particles in the bottom of the tank and transfer of light particles to the water surface based on their size, time of presence of water in the tank for separation of particles, oil density, amount of hydrocarbons in the sewage and body material and other equipment in the device based The type of sewage is one of the things that should be considered in the design of degreasers.

Seven Industrial Group is one of the largest design, production and manufacturing teams of API degreasing package in Iran. All stages of work in this complex are carried out under the supervision of professional engineers with experience in the field of water and wastewater treatment. It should be noted that Seven Industrial Group designs and manufactures API degreasers according to the environmental conditions used and the type of wastewater and colloidal materials in it. Therefore, there is a big difference in the products of this collection in terms of size, dimensions, material and equipment in them. The experts of this collection are ready to provide free advice and tips for purchasing API degreasers through the following communication channels.

The first reason for designing and producing the API degreaser package by the American Petroleum Institute was to separate oil particles and oil from the water in the refineries. Gradually, the use of this equipment expanded so that now these devices can be used in various environments such as the following.

The use of oil particle removal systems from water, despite its limitations, has many advantages and therefore can be a good option for treatment in environments with relatively low wastewater. One of the most important advantages of these devices is easy design in a short time. In addition, this group of wastewater treatment equipment has low energy consumption and is suitable for environments with temperatures above 5 ° C and particles with a size of less than 150 microns.